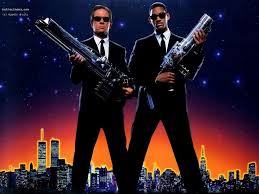 Synopsis: A New York City Cop (Will Smith) is recruited by a secret government agency to monitor alien activity on Earth. While working on his first assignment it is discovered by his partner K (Tommy Lee Jones) that a very dangerous alien called a “Bug” (Vincent D’Onofrio) has come to Earth. The Bug is after the Galaxy and the Men in Black are the only ones who stand in his way. Together J and K have to protect the Earth from the scum of the Universe.

Trivia: Actor Vincent D’Onofrio researched his role as Edgar by watching a lot of bug documentaries. In order to achieve his character’s distinctive walk, he put on knee braces so he couldn’t bend his legs, and taped up his ankles.

Why I think you should watch this: I remember seeing this movie in the theaters at age 10 and being both scared and amused it is just such a fun movie. After 15 years I still love it and recommend it to all as the quintessential Will Smith film sure some are better but this is the most entertaining of his in my opinion.

Hi my name is Trevor and this is my blog! Films are a passion of mine. I am a total film geek. I own over 700 films and the collection is ever growing. I studied Film Studies and Scriptwriting in College. What I have learned about films is mostly self taught.
View all posts by Trevor