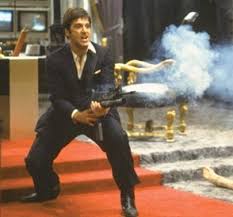 Synopsis: Cuban immigrant Tony Montana (Al Pacino), has arrived in Miami and is immediately met with hostility by American officials and put in an internment camp. While in the camp he and his friend Manny (Steven Bauer), are offered a way out of the camp early as long as they kill a former member of Castro’s government. After they complete the job, they are given jobs at a local Cuban fast food joint. One night they are asked by Omar (F. Murray Abraham), to pick up a shipment of Cocaine from an associate in attempt to give them more work. The job does not go as planned as one of the guys Tony is working with is killed and just before Tony is about to suffer the same fate Manny manages to save him. When Tony starts to work for Frank Lopez (Robert Loggia) who takes an instant shine to Tony because he is a hard working grunt and he starts having go to Colombia to make deals with a man named Alejandro Sosa. It becomes clear to Frank that Tony is becoming too powerful he tries to have Tony killed but that fails and Tony come for him. Now with Frank out of the way it means Tony is free to explore his own business options. Tony’s lust for power becomes to great as he betrays everyone close to him with tragic consequences.

Trivia: In the final shootout sequence, Al Pacino grabs the gun by the barrel. Although only blanks were used, his hand was badly burned, and production had to be shut down for a few weeks. Oliver Stone wrote this film while fighting a cocaine addiction. The word “yeyo” is used by Tony Montana (Al Pacino) as a slang word for cocaine. This word was not in the script, and was ad-libbed by Pacino during the first drug deal scene (chainsaw scene), and Brian De Palma liked it enough to keep using it throughout the film. Pacino learned the word while learning the Cuban accent.

Why I think you should see this: This movie might be the most influential film to the rap industry ever made whether or not that is a good thing I am not too sure, but that doesn’t mean this isn’t a great film. Al Pacino is vicious as power hungry Tony Montana and Steven Bauer does a great job trying to keep up as his friend Manny. Mary Elizabeth Mastrantonio does a really good job as Tony’s sister and the film just works on many levels. Oliver Stone does a great job handling the writing duties on this one and Brian De Palma shows why his older work is by far his best. This is a really entertaining film check it out sometime.

Hi my name is Trevor and this is my blog! Films are a passion of mine. I am a total film geek. I own over 700 films and the collection is ever growing. I studied Film Studies and Scriptwriting in College. What I have learned about films is mostly self taught.
View all posts by Trevor

2 responses to “Films to See Before You Die: #45 Scarface”